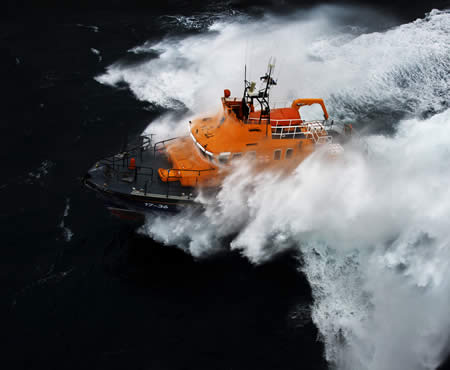 The winter of 2013/14 saw some of the worst storms in living memory relentlessly hit the UK, one after another. This resulted in massive flooding inland and around the coasts, damage to buildings and loss of life. Being an island, it’s not just those on land that suffer, sailors navigating our coasts have had a torrid time too.

The Royal National Lifeboat Institution (RNLI) was incorporated to save lives at sea, but that remit has changed over the last few years and they are now also very much in the thick of it inland these days too. As a result our brave, and largely unpaid volunteer, crews had a really busy time since the beginning of December 2013. Here are some of the challenges they have faced…

Brave volunteers risk their lives to save others

Help us to raise money for the RNLI

The RNLI is funded almost entirely by voluntary donations and legacies. This invaluable support enables the RNLI to save 22 people every day.

During 2012 lifeboats launched 8,346 times, rescuing over 7,900 people around the coasts of the UK and Ireland.

Similarly, the RNLI’s Lifeguard service attended to over 14,500 incidents and aided just short of 16,500 people.

Your money helps to keep this invaluable service running, saving lives at sea, on the beaches and, now, inland too!

This site uses Akismet to reduce spam. Learn how your comment data is processed.

The crews of the RNLI selflessly volunteer to go out to sea, in all weathers, to rescue and save the lives of those at risk around our coasts and up to 250 miles offshore.

Discover more about the invaluable work of the RNLI.

When the Coastguard shut down the local watch stations around our coasts, the volunteers of the NCI moved in. They restored a vital visual link with those at sea that the new  centralised hubs could not hope to provide.

Learn more about the valuable work this voluntary organisation provides to keep people safe at sea.

How can you help – make a donation

We do not encourage the amateur radio stations raising awareness of the RNLI and NCI to accept donations on behalf of either organisation because of the legal implications.

However, if you would like to make a donation, pick your chosen charity below and visit their official on-line donation page. Every penny counts when you’re saving lives at sea.

We’re holding a challenge for participants. Registered stations record the number of contacts they’ve had on each band/mode the SOS Radio Week League is automatically updated. At the end of the event we will send certificates to the top three stations on each band and mode.

SOS Radio Week is an annual awareness raising activity to benefit the RNLI and NCI created by Derek and David Hughes (G7LFC and M3LFC respectively), the founders of the Lifeboat Amateur Radio Society.

This activity is not an RNLI or NCI initiative, so please do not contact them if you have any questions about this event.

SOS Radio Week would like to credit the following to whom we are extremely grateful for allowing us to use their intellectual property on our web site:

Unless otherwise stated, the content of this web site belongs to, and is the copyright property of, the SOS Radio Week organisers.

Please feel free to link to this web site. However, if you would like to use any of the content from this web site on your own, please contact us before doing so.